Law of Dissipation at Tops Gallery

This fall, Tops Gallery in Memphis, TN will present Law of Dissipation, an exhibition of photographs by Dan Torop. The exhibition will open on September 16, 2016. 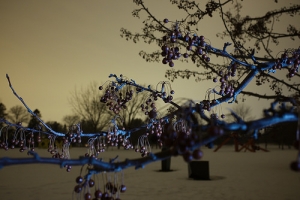 In a series of extended residencies at the Lynden Sculpture Garden beginning in the summer of 2013, Dan Torop made photographs on the grounds which integrate an historical text--Meriwether Lewis’s June 14, 1805 diary entry describing a day and night in the environs of the Great Falls of the Missouri River--with present day visual explorations. Mindful of ecologist Aldo Leopold's description of a nearby landscape, Torop responded to the passage of seasons, animals, and objects across the site, sometimes intervening, always observing.

Frozen Period refers to both a season and an historical epoch. Torop created many photographs during the winter of 2014, when the frigid grounds became an unfamiliar and difficult terrain. The harsh weather, the darkness, and the strict geographic limits of the project became important constraints in which it flourished. But all of the work Torop created was informed by a sense of the "frozen period," the time between the death of the sculpture garden's owner and creator, Peg Bradley, in 1978, and its opening to the public in 2010. During his months at Lynden, Torop sought out the interstitial, private times--early mornings, late evenings, nights--as ideal times to make work.